I started SST January 02 after a 8 week stretch of strength/core and JRA for fun. 20 minute protocol yielded about a 270W FTP. Fast forward to yesterday (Feb 04). I decided to do an impromptu 20 min protocol (warm up…5 min all out effort…then test) on my TT bike after a 4 day block of approximately 500TSS. I just wanted to see what I could do a bit fatigued. Average 20 min power was 316W.

Returning home and looking at the “FTP Contribution to TTE” chart in WKO+ my power at TTE is 263W on the PD curve and WKO+ has mFTP at 275.

I’ve been using both power and HR since 2007. Not that makes me an expert but, I know setting zones 5% less of the 20 minute overestimates zones for me. Setting zones to TTE power of 263 is also problematic as I’ve literally not done any max solo efforts much past 20 minutes this year. That leaves mFtp of 275…

Does your powermeter on your TT bike read higher? Just seems much higher than your test a month previous and after doing a 5 minute full gas effort. Also most can’t usually match power on TT bike compared to road bike, but regardless that is really beneficial that you can!

300 would be too much as you only have one effort that would truly show that is what your FTP is. More of an outlier at this point I feel. With WKO you also have to make sure to have the short hard efforts as pMax actually weights pretty heavily in the mFTP. So you would have to make sure to go outside and put out your best 15 second and 1 minute efforts. You have done a 5 minute and 20 minute so that is good. That will help the model.

Without doing longer efforts than 20 minutes it does hurt the TTE which maybe off because of it.

This is one problem with the mFTP is that you always have to be feeding it data and can not have any bad data. However seeing that your previous FTP test yielded a 270 watt FTP I would feel comfortable with you setting at 275 watts.

Look at back on previous years how does this line up? Did you have longer efforts last year? What was your mFTP last year? I’m assuming you have been training pretty consistently for a long time, with data since 2007 so you should have a good idea of whether it is 300 or 275. That is a pretty big difference.

Thanks for the super uber quick reply Jake!

Historically (several Quark PM’s) I’ve been able to put out more power 20-30-40 minutes on the TT bike. I realize I’m in the minority but, it is what it is. Regarding the numbers this year, they are done with the same PM, same bike, same road, same protocol.

Regarding comparing to previous years…in the vicinity so I too am comfortable with 275. For the last several years for VOS ITT my average power has been within a couple watts of 325. That’s about as good as I can get. But, this is sort of the reason for my inquiry. That is, I hope to bump that up to 330+ this year. Maybe not at VOS but, closer to my first A race in June.

First year using SST rather than LSD type miles. I’ve always set zones in ref to the 20 min number. I’ve always felt too high! So this year with SST and not getting to caught up in a number and setting zones a touch lower perhaps I can reach new highs.

Also, more info on the opening 270 “FTP” beginning of January v. the latest 300. I basically did not ride in December nursing a dead lift injury. I have done a good job SST’ing and FTfP so with as many years riding the 30W swing while large, doesn’t seem like an error. If anything I think the initial test was too low.

Oh ok, so you the short efforts. Quite strange how it is reading low. That is why actually knowing and understanding the numbers is important and not just going off a model. I look at WKO a bit for the people I coach and I feel some just don’t match up. You really have to have all durations covered at full gas.

Knowing that you have done 325 for Valley of the Sun TT really makes me think your FTP could be higher now. So it’s not just something you did recently one time. This is also why it’s hard to give someone an answer without seeing all the data.

What is good is you did do a 5 minute full gas effort before the 20 minute test. That should have taking out the anaerobic power for the equation and help not throw off your true FTP number.

I guess the one thing you can do is just go out and hit an hour effort. On a Saturday ride just go for it. It would be the most accurate way of gaging what your true FTP is. It should also help the model. As hard as it is, it is also a great training effort.

It is good to have an accurate FTP so you know you are dong the work you want to be doing. The benefits of riding at sweet spot is you are riding right below your FTP. Allow you to repeat efforts, do more of it and recovery from day to day. But if it is set to low you are not really riding as hard as you can and if you are riding over your FTP you won’t be recovering like you should be.

Also since you want to get to 330 watts it would be good to train as close to that effort as well. Setting your FTP at only 275 if it is much higher is not going to help you get there. Also if Valley was at 325 you will want to be ready for that effort.

What is good is you did do a 5 minute full gas effort before the 20 minute test. That should have taking out the anaerobic power for the equation and help not throw off your true FTP number.

Good stuff Jake. In addition to the 5 minute effort I came in with close to 500TSS. 225 of that being Sunday racing two criteriums of 60 minutes and 55 minutes (CBR’s in Socal).

Well shoot. Now you have me thinking zones with 275 might be a touch low. I leave for a work trip in a couple hours and back Friday. I’ll retest Saturday when hopefully a touch fresher and see what happens.

Yeah just knowing what you have done in the past and what you would typically do in a few weeks time at VOS.

However there is a thing as over testing which you want to avoid. You can look at your norm power for these criterium if they are 60 minutes, or if you have done some group rides. Look at your heart rate and see how they compares as well.

So say you have a sweet spot ride planned for the weekend. Start your effort at 275 see how your heart rate reacts and your perceived exertion. If after 30 minutes you still feel really good chances are you are doing sweet spot and your threshold is closer to that 300 mark based on your last test. 275 watts would be 91% of a 300 watt FTP which would be sweet spot. So you would still be sticking to a plan and not technically testing and going full gas which you want to avoid doing all the time. So there is an upside to that. Also this would help the model in WKO by having a long effort hat was over your TTE! And after the 30 minutes, or at least to your current TTE you feel you are going all out you can just stop and feel comfortable in knowing that number maybe 275 watts at the moment. It’s early in the year and with an A race in June don’t stress it. You just did 316 watts being fatigued with a big week and a 5 minute effort so your power is there. 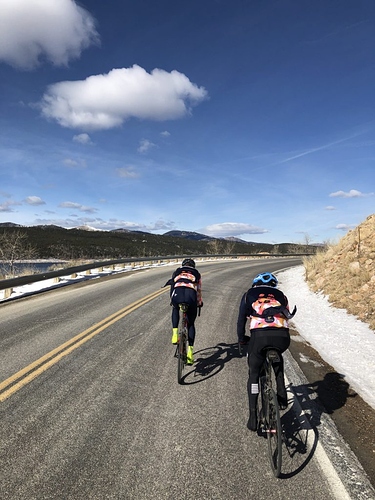 How to Measure FTP Improvement with Normalized Power - FasCat

How to Measure FTP Improvement with Normalized Power from Group Ride and Race Power Data: Podcast with Coach Frank Overton and Jackson Long

Only thing is if you are really good at anaerobic power then that again will be too high, but could give you more insight.

Very insightful thank you! Sounds like a good plan this week end. Cheers!

@Jake update…VOS ITT I did 320 for a little over 30 minutes. My team mate won the 45+ and so I worked the front of the RR for 2.5hours until total cramp mode just prior to last climb . TTE on WKO+ moved from 34 min to 1 hr 02 min which is more a product of not doing many long rides this season. 1 hour was 280 and NP for the entire race including one climb super slow due to cramps was 250. Going into this I did what you said and figured a better number might be 280 which we now confirmed is legit. Anyways just a note to say thank you for the help and insight.

Cool! Thanks for the update! Glad you got some good data to fill in the holes. Awesome your teammate won and the following day you laid it on the line for him. Hope that worked out.

We defended the GC to the end and won 2 of the three stages and a 2nd on the other stage. Not perfect team execution but, as good as it’s going to get for an amateur masters team with many guys not experienced on the road. Another team mate and I set tempo and patrolled the front both for the road and criterium. For the road stage (60 odd miles-I forget the distance) we both did around 2200Kj’s and approximately 225TSS for 2.5 hours until we couldn’t control it going into the last climb. Have not looked at the criterium yet but, we were present at the front chasing and keeping a good tempo as the laps counted down. We were able to deliver our sprinter and GC guy as his sweeper close to where we planned in the planned position. They sealed the deal from there.

Not bad for just starting to train in January. Mostly SST to date. Pushing the CTL and watching ramp rate as you guys always tell us.