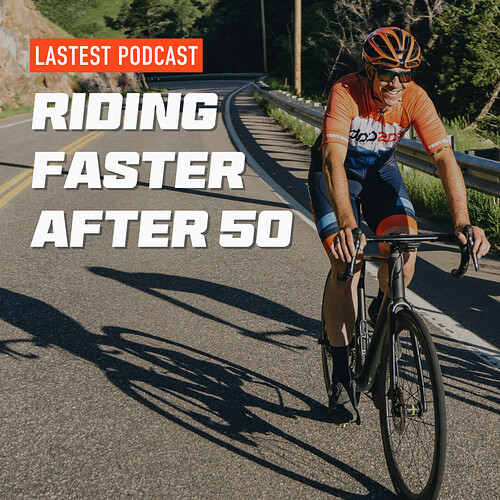 We’ve podcasted on the topic of master's training three times before including on Masters CTL, Master’s Recovery, and the Seven Habits of Successful Masters Cyclists. In this episode, Coach Frank touches on those again, but dives down even deeper and...

Frank:
Don’t yet recognize myself in your podcast detail but I do recognize the inevitability of it. I whined at Jake re the “downer” aspect.

Hey FasCats! Just wanted to let you all know that there was an error with the coupon code that The Big Cat mentioned in this podcast.
We have fixed it now, so for any of you that want to save

and ride faster… be sure to use that coupon code before it expires on Thursday at midnight (MST)!

Next year is my 10th anniversary of turning 50, thank you for another great podcast on the topic!

Hey Frank! Happy Birthday!
Question from the Podcast. I’m 54 and Just started a modified version of the Advanced Leadville 100 plan. I say modified because I’m doing the Leadville Stage Race and I moved the Big SST & Climbing Days one week earlier to accommodate the Stage Race. My Goal is Sub 9hrs. In 2019 I had an 8:33 in the Stage Race so I’m close.
Each week there is 10 hours of riding split over back to back days with the final week before taper being 8+4 hours. So far I’ve had 410tss and 416tss on the paired days and recovered for my next workouts as planned.
In the Podcast you said a 50+ athlete shouldn’t be on the “Advanced” plan.
How should I modify the training plan to better fit a 54 year old rider with a Big Belt Buckle goal?
Thanks!
Pat
PS I only have 4 work days between now and Leadville, so plenty of time to be Lazy

as a “late” starter to cycling I am riding stronger and faster now (thanks in part to Fascat) than I was 10 years ago!

This podcast was terrible and awesome at the same time. I’ve been training with power since 1998 and racing since 1992 so similar to Frank as far as long term data. I also experienced a major drop in FTP in my late 40’s. I haven’t heard anybody talk about this before…I’ve been feeling like there is something wrong for the last few years but I couldn’t really figure it out. When I heard Frank’s FTP had a similar drop in FTP I felt better…and was horrified as well!

What the hell is up with this? And I know the podcast talked about accepting it but…really? I mean, I’ve got time, I’ve got money, isn’t there any way to get back to my old self? ( I mean…without finding an “anti-aging doctor” LOL) I really don’t feel much different than when I was in my 30’s, I’m just not cranking out the big watts like before (I just turned 53).

Even if this is just “how things are”, I really want to thank Frank for putting it out there. Simply knowing that at least one other guy is in the same boat makes me feel a lot better.