So i have a Quarq PM and a Kickr Core.
I always trained using the values from the Quarq PM. However, today i accidently set the Kickr as the PM for Zwift to use while doing my workout. And this is where my issue lays.
I felt the workout was easy. (it was a 3x8 Muscle Tension workout). So on the 3rd interval, i went to the settings and changed the PM to the Quarq and holy crap what a difference!!!
Long Story short, i discovered that my Kickr reads about 20/25 watts more than my Quarq…
For now this isn’t an issue, since i can just use my Quarq all the time.
But in about 1month’s time, 2 month’s max, i won’t be able to use my Quarq when training indoors (and that’s where i’ll be doing most of my workouts…).
So my question is, when that time comes, how will i cope with the watts difference? i mean, if the kickr reads about 20 to 25 watts more, should i just bump the intensity of the workout when i’m training indoors?
Or should i go the other way around? Base my watt numbers on the Kickr and actually lower intensity when outdoors and using my Quarq PM? Since i have no clue which one of them is actually the correct one…
Any idea on what’s the best way to address this issue?

Small update.
Went up Alp du Zwift today. Nice little experiment since i climbed it 3 weeks ago.
So comparing the exact same segment, starting from km 6.0 and ending at km 17.7 here’s what i found out…

3weeks ago using my Quarq Pm:
Heart Rate avg was at 151
Power Avg was always at Z2, sometimes at low Z3
Cadence avg was 69rpm

I shaved off 37mins total of my previous Alp du Zwift time!!!

So it’s a huge difference… The question now is, which PM has the true value, and which one is the incorrect one…
Since my training will be almost exclusively indoors, i’m thinking i should just use the Kickr Core from now on, and adjust the Training Zones based on this PM instead of the Quarq one?

As far as Zwift goes, 200 watts is always 200 watts as long as the bike you’re using in game is the same and you’re not benefiting from powerups (like drafting or the feather or whatever).

What percentage of your max HR is 154 bpm? From there you could gauge if either Z2 or Z4 power correlates best with your HR-based intensity.

For research, are you able to put your bike with the Quarq power meter on the Kickr Core and record the power numbers separately? Record on PM on Zwift and the other via a head unit/other device. Compare the two datasets after you’re done riding and, with your HR insights, determine how different the data actually is, and which data may best reflect your heart rate.

154 bpm supposedly is Z3.
Like i wrote in my first post, i did a workout where i tried both the kickr and the Quarq. And the work was a lot harder when using the Quarq, and the HR went up a lot as well when using the Quarq.
Untill that day, i never doubted the Quarq, since that’s all i ever used. But when i accidently used the Kickr i realized the massive difference between the 2.
At this point i’m thinking the Kickr might be the correct one after today’s Alpe du Zwift.
I wasn’t riding near my physical limit. What i felt was that i was at high Z2, Low Z3 most of the time when going up the Alpe. And looking at watt numbers alone, one would think i was riding at or above FTP most of the time… Which isn’t possible… So that leads me to believe that my FTP isn’t what i thought it was since it was calculated with the Quarq PM…

Yeah it’s a mystery. You always have your HR and feel to measure up to the reported power data. If you set your FTP with one source, then always use that source to train with if possible Frank talks about your indoor and outdoor FTP, which I think spans both your RPE and variations in power measurement indoor versus outdoor.

And Zwiftpower.com has a free tool to analyse power from two sources, which will help a lot, once you measure both at same time (after calibration)

Is your Quark double sided? But it’s a huge difference and something other than leg imbalance is probably causing it, although might contribute.

Might also be worth asking to borrow a friends or asking a friend who knows their power numbers to try both of yours to give an anecdotal t
opinion on what one is closer to reality.

Yeah my Quarq is double sided.
Leg imbalance isn’t the issue either since i’m usually betweem 50/50 and 48/52 at most.

Gonna give that zwiftpower tool a try. Thx for the tip,

Ok so today i did a quick test running both Pm’s simultaneously.
Here’s the data: 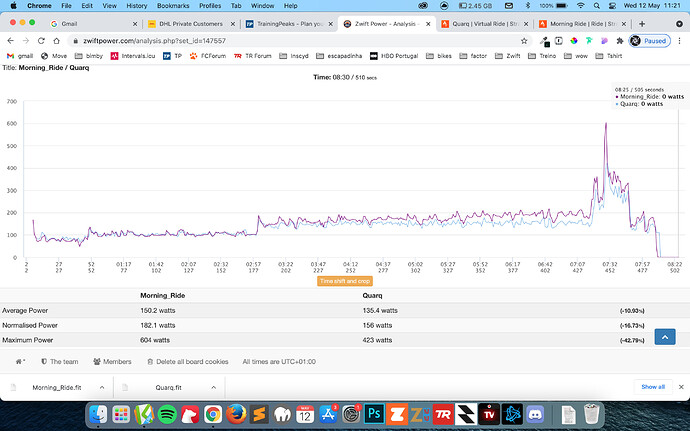 So i did quick Z2 effort and a quick sprint to see the differences.
So as soon as i get above 130w, the quarq starts lagging behind in wattage. And lagging hard.
Sometimes 40 to 50 watts difference…
Like i said above, most of my training will be done indoors, so i’ll just use the Kickr numbers. But i’m just wondering, when i go outside, how should i handle this?
Since i know the Quarq reads lower. Should i even be looking at the numbers? Should i just look at my HR when outside? Or just ride purely by feel?

Big difference! Guess you can use both PMs when riding indoors at least to start with until you get a rough idea of your two different FTPs on each PM which will help you outdoors.

I would also separately discuss with Customer Support(s) and borrow a friend / friends PM to get s better idea of the correct numbers.

Sadly don’t have any buddies with PM’s…
But yeah, already in touch with Sram and Wahoo regarding this issue.

The first thing I would do is get numerous data points to get a good idea of the difference between the two power meters across a variety of intensities.

Then, you’ll need to do two things:

-Manually adjust TSS from outdoor rides to be more in line with the TSS you’d achieve if your power meters read the same.

-Keep track of indoor and outdoor PBs so you can track progress-your Quarq reads so much higher than your trainer that you’ll want to account for that so you don’t trick yourself into thinking you’ve set a PB when you really haven’t.

One important question is, when you go outside, what kind of riding are you typically doing?

If you’re doing structured workouts outdoors, then a third thing you should add to that list is creating a different set of zones for outdoor riding.

If you mostly go outside when you’re doing a group ride or something unstructured, you may not need to bother with that.

Thx for the reply.
One quick note, it’s the Kickr that’s reading higher, not the Quarq.
But i get the idea of your reply.
And when i go outdoors is mostly for Z2 rides, or the Sunday ride that i always do with my wife. All structured training, intervals,etc is all done indoors.